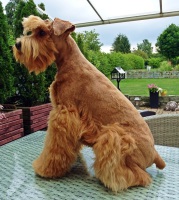 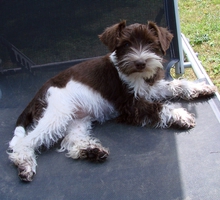 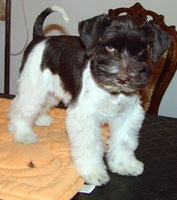 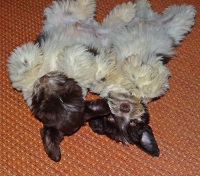 Sadly, massive defamatory statements have been implicated lately on SPV e. V. and its management board by an American and a German breeder.

Within those statements the American breeder , who obviously consideres her finacial goals endangered, tries to discredit the SPK Zuchtwart in public with untrue allegations via the Internet.

All on the web-site http://www.maximilianschnauzers.com/puppies.html allegations are provable untrue as well as unfortunately meanwhile subject to an international lawsuit against the owner of the above web-site, concerning defamation and compensation of damages .

Obviously above all financially motivated, the American breeder tries to sell relatively high-priced puppies to interested persons , to „re-establish“ a „party-breed“ exclusively through her own monopoly.

I therefor feel myself forced to do a rectification on this matter ( however: it seems to be as much as a pitty as incomprehensable that an already small number of positively motivaded breeders have to infamize each other instead of searching for cooperation, even if personal goals and motivation might differ ….

We had agreed on the subject that a breeder ,who had turned to SPK , would be welcomed to breed black and white parti-Schnauzers under SPK sovereignty and on registering them. Doing this she would only have to work according SPK regulations.

What seemed to develope in a positive direction in the beginning turned out to go along with postulations from the breeder´s side (which did not conform to our breeding regulations) which we were not willing to compromise with.

We therefore suggested the breeder to leave the association - which she did in the following.

From that moment on the  communication turned to verbal abuse , decrial and defamation....

SPV is commited to breeding regulations that leave much room to our breeders to breed; however these rules must apply to every individual breeder – otherwise an association has no right of existence.

We do advance all breeders who need help - but only and exclusively within the frame of our breeding regulations.

Finally, when the breeder in question demanded to register blemish coloring under a fantasy name , we definitely seperated our ways in this specific case. Also the request for possible preparation work to develop a provisional standard was not granted .

Beyond that point there is no need discussing  internal Club affairs concerning articles of corporation  with non-members.

The names of specific colorings of an american Breeders Cub is by no means a standard thas is to be ackowledged by a German Zuchtverein - especially if  the foreign breeder makes no difference between "registration" and "accreditation"....